Catenae (crater chains) should not to be confused with Boulder Tracks! 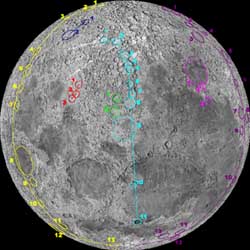