Ptolemaeus (and Ammonius on its floor) 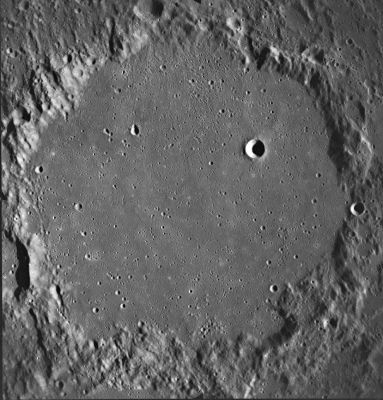 (IAU Directions) PTOLEMAEUS.--Taking its very favourable position into account, this is undoubtedly the most perfect example of a walled-plain on the moon's visible superficies. It is the largest and most northerly component of the fine linear chain of great enclosures, which extend southwards, in a nearly unbroken line, to Walther. It exhibits a very marked departure from circularity, the outline of the border approximating in form to a hexagon with nearly straight sides. It includes an area of about 9,000 square miles, the greatest distance from side to side being about 115 miles. It is, in fact, about equal in size to the counties of York, Lancashire, and Eastmorland combined; and were it possible for one to stand near the centre of its vast floor, he might easily suppose that he was stationed on a boundless plain; for, except towards the east, not a peak, or other indication of the existence of the massive rampart would be discernible; and even in this direction he would only see the upper portion of a great mountain on the wall.
The border is much broken by gaps and intersected by passes, especially W. and S., where there are several valleys connecting the interior with that of Alphonsus. The loftiest portion of the wall, which includes many crateriform depressions, is on the E., where one peak rises to nearly 9,000 feet. Another on the N.W. is about 6,000 feet above the interior. On the N.E. is a remarkable crater-row, called, from its discoverer, "Webb's furrow," running from a point a little N. of a depression on the border to a larger crateriform depression on the S. of Hipparchus K. Birt terms it "a very fugitive and delicate lunar feature." As regards the vast superficies enclosed by this irregular border, it is chiefly remarkable for the number of large saucer-shaped hollows which are revealed on its surface under a low sun. They are mostly found on the western quarter of the floor. Some of them appear to have very slight rims, and in two or three instances small craters may be detected within them. Owing to their shallowness, they are very evanescent, and can only be glimpsed for an hour or so about sunrise or sunset. The large bright crater A, about 4 miles in diameter on the N.E. side of the interior, is by far the most conspicuous object upon it. Adjoining it on the N. is a large ring with a low border, and N. of this again is another, extending to the wall. Mr. Maw and Mr. Mee have seen minute craters on the borders of these obscure formations. In addition to the objects just specified, there is a fairly conspicuous crater, d, on the N.W. quarter of the floor, and a very large number of others distributed on its surface, which is also traversed by a network of light streaks, that have recently been carefully recorded by Mr. A.S. Williams. A cleft, from near Reaumur A, traverses the N. side of the floor, and runs up to Ptolemaeus d.