Alphonsus, with Rimae Alphonsus on its floor (impact site of Ranger 9) 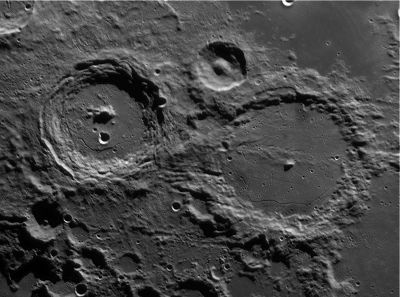 Wes Higgins In this view, west is up and north to the right. Alphonsus is the large crater on the right. To its left is the similar, but smaller, Arzachel; and above them Alpetragius. Part of the southeastern floor of Ptolemaeus is also visible on the extreme lower right. On the floor of Alphonsus there are a number of IAU-named features. These include Rimae Alphonsus, Chang-Ngo and the presumed volcanoes Ravi, Monira, José and Soraya.

(IAU Directions) ALPHONSUS.--A large walled-plain, 83 miles in diameter, with a massive irregular border abutting on the S.S.W. side of Ptolemaeus, and rising at one place on the N.E. to a height of 7000 feet above the interior. The floor presents many features of interest. It includes a bright central peak, forming part of a longitudinal ridge, on either side of which runs a winding cleft, originating at a crater-row on the N. side of the interior. There is a third cleft on the N.E. side, and a fourth near the foot of the W. wall. There are also three peculiar dark areas within the circumvallation; two, some distance apart, abutting on the E. wall, and a third, triangular in shape, at the foot of the W. wall. The last-mentioned cleft traverses this patch. These dusky spots are easily recognised in good photographs of the moon.

A Long Line in a Clutter of Magnificence. Just Another Glorious Image Craters and Papers Micro-Topo Volcanic Craters on the Moon The Golden Triad New Observations of a Well-Known Area