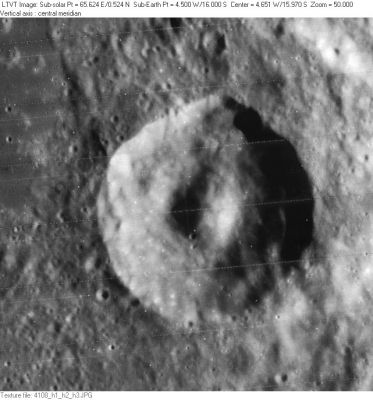 LO-IV-108H
Alpetragius is in the center. The 5-km crater directly above it (near the top margin) is Alphonsus X'. A part of Alpetragius X, a ruined 32-km ring on the northeast shore of Mare Nubium is visible in the upper left. 11-km Alpetragius N is also present, but barely visible as a vague depression just outside the southeast rim of Alpetragius.
Note the very pronounced central peak of Alpetragius, which is often nicknamed E'gg-in-a-nest.

(IAU Directions) ALPETRAGIUS.--A fine object, 27 miles in diameter, closely connected with the S.W. side of Alphonsus. It has peaks on the E. towering 12,000 feet above the floor, on which there is an immense central mountain, which in extent, complexity, and altitude surpasses many terrestrial mountain systems--as, for example, the Snowdonian group. The massive barrier between Alpetragius and Alphonsus deserves careful scrutiny, and should be examined under a moderately low morning sun. On the W., towards Lassell, stands a brilliant light-surrounded crater.

A Long Line in a Clutter of Magnificence.
New Observations of a Well-Known Area

Debris Channels (at Alpetragius B, aka Garcia-Gomez).