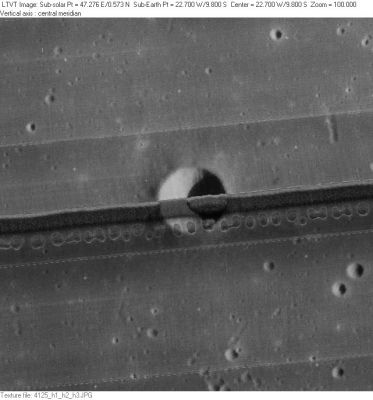 LO-IV-125H The streak across the middle of the frame is a defect in the development of the Lunar Orbiter film.

LPOD Photo Gallery Lunar Orbiter Images Apollo Images Although there seems to be nothing in the LPI's Apollo Image index which shows Kuiper or Bonpland E, this distinct bowl-shaped crater in Mare Cognitum was photographed during the mission of Apollo 16!- DannyCaes Apr 4, 2010
- Apollo 16's orbital ITEK Panoramic stereo-frames of Kuiper (Bonpland E):
AS16-P-5436 shows Kuiper a little bit beyond (to the right) of the frame's centre (scroll to the right).
AS16-P-5441 also shows Kuiper (scroll to the right, beyond the frame's centre).
WARNING: the LPI's so-called stereo companion of frame 5441 (frame 5346) shows a totally different part of the moon's surface!
- Research Apollo 16 orbital photography and detection of error at the LPI's so-called "stereo-pair": Danny Caes

An unnamed crater south of Kuiper?

Note:
It's a bit strange to come across Kuiper in VENUS-related articles. One should expect the appearance of his name in lots of moon articles. I went through all 701 pages of Mysterious Universe, but... detected Kuiper on only two pages... - DannyCaes Apr 26, 2015