Petavius, with Rimae Petavius on its floor 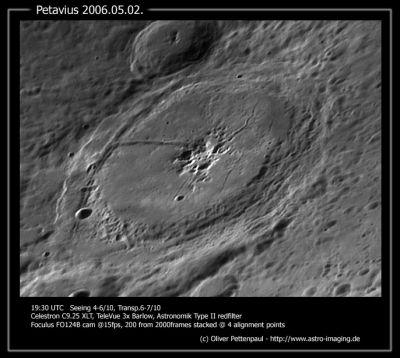 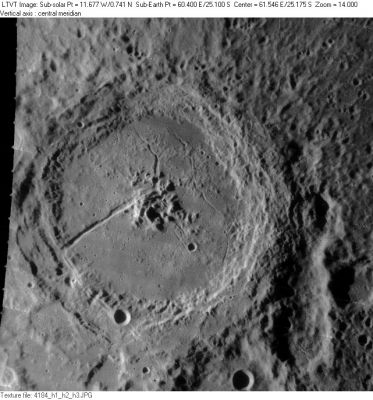 Left: Oliver Pettenpaul In this Earth-based photo, north is to the upper right. The 57-km crater shadowed crater above Petavius' (just outside its northwest rim and not visible in the LO view) is Wrottesley.
Right: LOIV-184-H2 North-up aerial view (with east to the right). To Petavius' east is an elongated bowling-pin shaped depression known as Vallis Palitzsch. Its lower part is regarded also as a separately-named 41-km crater (Palitzsch). To the lower left of Palitzsch is partically visible 83-km Hase, with 14-km Hase A on its floor. 11-km Petavius C (mentioned below under Additional Information) is the circular crater on Petavius' south rim (at top in the inverted Earth-based view). On Petavius' floor are the famous Rimae Petavius, consisting primarily of the branches emanating to the north and southwest (Elger's "great cleft") from the central peaks.

(IAU Directions) PETAVIUS.--The third member of the great meridional chain: a noble walled-plain, with a complex rampart, extending nearly 100 miles from N. to S., which encloses a very rugged convex floor, traversed by many shallow valleys, and includes a massive central mountain and one of the most remarkable clefts on the visible surface. To observe these features to the best advantage, the formation should be viewed when its E. wall is on the evening terminator. At this phase a considerable portion of the interior on the N. is obscured by the shadow of the rampart, but the principal features on the S. half of the floor, and on the broad gently- shelving slope of the E. wall, are seen better than under any other conditions. The border is loftiest on the W., where the ring-plain Wrottesley abuts on it. It rises at this point to nearly 11,000 feet, while on the opposite side it nowhere greatly exceeds 6,000 feet above the interior. The terraces, however, on the E. are much more numerous, and, with the associated valleys, render this section of the wall one of the most striking objects of its class. The N. border is conspicuously broken by the many valleys from the region S. of Vendelinus, which run up to and traverse it. On the S., also, it is intersected by gaps, and in one place interrupted by a large crater. There is a remarkable bifurcation of the border S. of Wrottesley. A lower section separates from the main rampart and, extending to a considerable distance S.W. of it, encloses a wide and comparatively level area which is crossed by two short clefts. The central mountains of Petavius, rising at one peak to a height of nearly 6,000 feet above the floor, form a noble group, exceeding in height those in Gassendi by more than 2,000 feet. The convexity of the interior is such that the centre of it is about 800 feet higher than the margin, under the walls; a protuberance which would, nevertheless, be scarcely remarked in situ, as it represents no steeper gradient than about 1 in 300 on any portion of its superficies. The great cleft, extending from the central mountains to the S.W. wall, and perhaps beyond, was discovered by Schroter on September 16, 1788, and can be seen in a 2 inch achromatic. In larger instruments it is found to be in places bordered by raised banks.

The super boulder in Petavius B

Trenchant Observations on a Trench. On the Limb Again. LPOD (Repeat of 3/7/2006 A Bend in the Middle Moderate Sun over a Magnificent Crater On the Limb Again A New Kind of DHC Petavius Naked