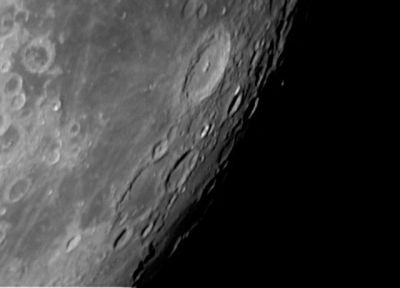 (IAU Directions) VENDELINUS.--The second great enclosure pertaining to the meridional chain--a magnificent walled-plain of about the same dimensions as Langrenus. It is bounded by a very irregular rampart, which, under evening illumination, is especially noteworthy, though nowhere approaching the altitude of that of Langrenus. Its continuity on the E. is broken by the great ring-plain Vendelinus C, about 50 miles in diameter, a formation resembling Langrenus in miniature. This is hexagonal in shape, and has many rings and depressions on its E. wall. South of Vendelinus C, the wall of Vendelinus runs up in a bold curve to the fine terraced ring- plain Vendelinus B, and is surmounted by a bright serpentine crest, and traversed by several valleys running down the slope to the floor. B has a small crater on its N. wall, and another in the interior. There is a wide gap in the S. border of Vendelinus, which is partially occupied by another somewhat smaller ring-plain, bounded by a southerly extension of the W. wall, which includes on its outer slope many craters and other depressions, and abuts near its N. end on the large ring-plain Vendelinus A, which has a prominently terraced wall and a large bright central mountain. Between A and C extends a plateau that may be regarded as the N. limit of the formation, including, among other minor details, a fine cleft, which traverses it from N. to S., and ultimately extends to a group of craters on the floor. On the S. side of the interior is one large ring-plain, flanked on the E. by two small craters. Near the N. end are many bright little craters, many of them unrecorded. Vendelinus C is bordered on the W. by two large semicircular formations with low walls extending on to the floor. Mr. W.H. Maw and others have detected many minute depressions in connection with these curious objects; and N. of them, on the outer slope of C, where it runs out to the level of the plateau, I have seen the surface at sunset riddled like a sieve with craterlets and little pits. There is an irregular ring-plain N. of A, with linear walls, and another, much smaller and brighter, on the N. of this, standing a little beyond the N. limits of Langrenus.

A small "overlooked" chain of secondary craters between Vendelinus and Langrenus was imaged by Joseph H.C. Liu and published in the Summer 2006 issue of Selenology: Journal of the American Lunar Society.- fatastronomer

Godefroy Wendelin (June 6, 1580 – October 24, 1667) or Vendelin was a Flemish (Belgian) astronomer. He is also known by the Latin name Vendelinus. Around 1630 he measured the distance between the Earth and the Sun using the method of Aristarchus of Samos. The value he calculated was 60% of the true value (243 times the distance to the Moon; the true value is about 384 times; Aristarchus calculated about 20 times). In 1643 he recognized that Kepler's third law applied to the satellites of Jupiter.

Vendelinus C was called Smith by Wilkins and Moore, but the IAU did not accept that name.

The location of Van Langren's Vendelinus (Wendelini) was at the crater which is officially known as Maskelyne A (see page 197 in E.A.Whitaker's Mapping and Naming the Moon).