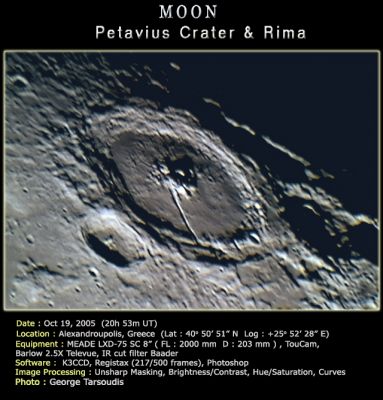 George Tasroudis (Wrottesley is crater in front of Petavius)

LPOD Photo Gallery Lunar Orbiter Images
Wrottesley was photographed by Apollo 15's orbital Mapping/Metric Fairchild camera. This crater near Petavius is visible on Apollo 15's south looking oblique photographs. One such Fairchild frame is AS15-M-2527, in which Wrottesley was captured near the central part of the depicted curved horizon.
Research Danny Caes

(IAU Directions) WROTTESLEY.--A formation, about 25 miles in diameter, closely associated with the W. wall of Petavius, the shape of which it has clearly modified. Its border on the W., of the linear type, rises nearly 9,000 feet above a light interior, where there is a small bright central mountain and some mounds. There is a prominent valley running along the inner slope of the E. wall.

Trenchent observations of a Trench Uninspiring, but an Active History Limb Gift