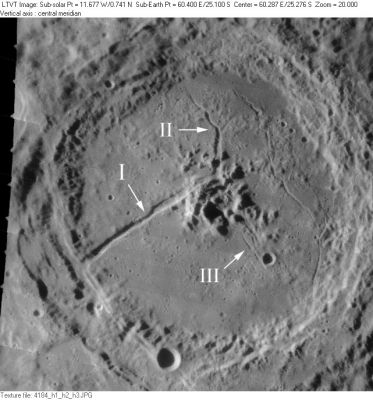 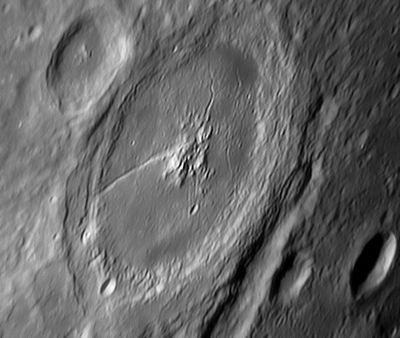 (IAU Directions) PETAVIUS.--The third member of the great meridional chain: a noble walled-plain, with a complex rampart, extending nearly 100 miles from N. to S., which encloses a very rugged convex floor, traversed by many shallow valleys, and includes a massive central mountain and one of the most remarkable clefts on the visible surface. ... There is a remarkable bifurcation of the border S. of Wrottesley. A lower section separates from the main rampart and, extending to a considerable distance S.W. of it, encloses a wide and comparatively level area which is crossed by two short clefts. ... The great cleft, extending from the central mountains to the S.W. wall, and perhaps beyond, was discovered by Schroter on September 16, 1788, and can be seen in a 2 inch achromatic. In larger instruments it is found to be in places bordered by raised banks.

Trenchant Observations on a Trench. On the Limb Again. LPOD (Repeat of 3/7/2006 A Bend in the Middle Moderate Sun over a Magnificent Crater On the Limb Again A New Kind of DHC Petavius Naked Petavius: Rilles & Volcanic Spots Four in a Row Limb Gift