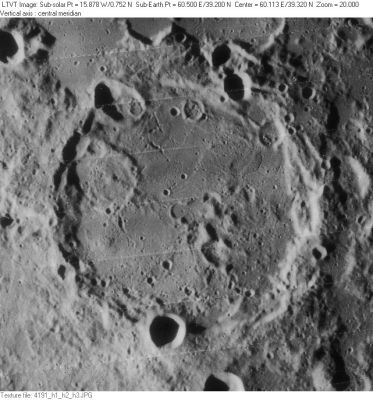 (IAU Directions) MESSALA.--This fine walled-plain, nearly 70 miles in diameter, is, with its surroundings, an especially interesting object when observed under a low angle of illumination. Its complex border, though roughly circular, displays many irregularities in outline, due mainly to rows of depressions. The best view of it is obtained when the E. wall is on the evening terminator. At this phase, if libration is favourable, the manifold details of its very uneven and apparently convex floor are best seen. On the S.E. side is a group of large craters associated with a number of low hills, of which Schmidt shows five; but I have seen many more, together with several ridges between them and the W. wall. I noted also a cleft, or it may be a narrow valley, running from the foot of the N.E. wall towards the centre. On the floor, abutting on the N.W. border, is a semicircular ridge of considerable height, and beyond the border on the N.W. there is another curved ridge, completing the circle, the wall forming the diameter. This formation is clearly of more ancient date than Messala, as the N.W. wall of the latter has cut through it. Where Messala joins Schumacher there is a break in the border, occupied by three deep depressions.