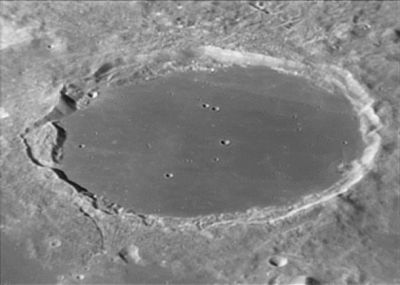 (IAU Directions)
PLATO.--This beautiful walled-plain, 60 miles in diameter, with its bright border and dark steel-grey floor, has, from the time of Hevelius to the present, been one of the most familiar objects to lunar observers. In the rude maps of the seventeenth century it figures as the "Lacus Niger Major," an appellation which not inaptly describes its appearance under a high sun, when the sombre tone of its apparently smooth interior is in striking contrast to that of the isthmus on which the formation stands. It will repay observation under every phase, and though during the last thirty years no portion of the moon has been more diligently scrutinised than the floor; the neighbourhood includes a very great number of objects of every kind, which, not having received so much attention, will afford ample employment to the possessor of a good telescope during many lunations.

The border of Plato, varying in height from 3,000 to 4,000 feet above the interior, is crowned by several lofty peaks, the highest (7,400 feet) standing on the N. side of the curious little triangular formation on the W. wall. Those on the E., three in number, reckoning from N. to S., are respectively about 5,000, 6,000, and 7,000 feet in altitude above the floor. The circumvallation being very much broken and intersected by passes, exhibits many distinct breaches of continuity, especially on the S. There is a remarkable valley on the S.E., which, cutting through the border at a wide angle, suddenly turns towards the S.W., and descends the slope of the glacis in a more attenuated form. Another but shorter valley is traceable at sunrise on the E. On the N.E., the rampart is visibly dislocated, and the gap occupied by an intrusive mountain mass. This dislocation is not confined to the wall, but, under favourable conditions, may be traced across the floor to the broken S.W. border. It is probably a true "fault." On the N.W., the inner slope of the wall is very broad, and affords a fine example of a vast landslip.

The spots and faint light markings on the floor are of a particularly interesting character. During the years 1869 to 1871 they were systematically observed and discussed under the auspices of the Lunar Committee of the British Association. Among the forty or more spots recorded, six were found to be crater-cones. The remainder--or at least most of them--are extremely delicate objects, which vary in visibility in a way that is clearly independent of libration or solar altitude; and, what is also very suggestive, they are always found closely associated with the light markings,--standing either upon the surface of these features or close to their edges. Recent observations of these spots with a 13 inch telescope by Professor W.H. Pickering, under the exceptionally good conditions which prevail at Arequipa, Peru, have revived interest in the subject, for they tend to show that visible changes have taken place in the aspect of the principal crater-cones and of some of the other spots since they were so carefully and zealously scrutinised nearly a quarter of a century ago. The gradual darkening of the floor of Plato as the sun's altitude increases from 20 deg. till after full moon may be regarded as an established fact, though no feasible hypothesis has been advanced to account for it.

On the N.W. of Plato is a large bright crater, A; and, extending in a line from this towards the W., is a number of smaller rings, the whole group being well worth examination. On the N. there is a winding cleft, and some short crossed clefts in the rugged surface just beyond the foot of the wall, which I have seen with a 4 inch achromatic. The region on the E., imperfectly shown in the maps, includes much unrecorded detail. On the Mare Imbrium S. of Plato is a large area enclosed by low ridges, to which Schroter gave the name "Newton." It suggests the idea that it represents the ruin of a once imposing enclosure, of which the conspicuous mountain Pico formed a part.