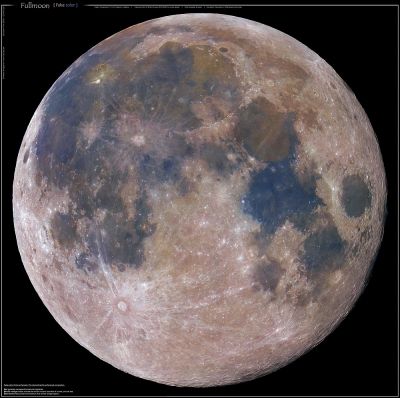 A greatly color-enhanced Full Moon photographed by Mario Weigand from Offenbach am Main, Germany, on October 17, 2005 at 21:40 UT. The visible disk is 99.79% illuminated, which is equivalent to saying the center of the Moon is 5.25° from the observer's anti-solar point. Shadowing is clearly evident on the side farthest from the Sun (the east limb in this case). For many observers in many months the Moon comes no closer to opposition than this; and most scientific references to a "Full Moon" (e.g., for purposes of standard brightness, reflectance, etc.) are to a Moon with roughly this kind of illumination. In this particular case, the official moment of geocentric Full Moon came at 12:14 UT during a partial eclipse visible in some parts of the world (but not from Mario's location).

As explained in more detail on the lunar phases page, the technical definition of a "Full Moon", used by astronomers, is the moment when the Moon is 180° away from the Sun in celestial longitude. More generally, the term is used to refer to any moon that approximates the appearance of a Full Moon, that is, one in which nearly 100% of the visible disk appears filled with sunlight. Perfect Full Moons can never be observed from Earth because of interference from the Earth's shadow; and in most months when the tracks of the Sun and Moon cross paths in the sky they are sufficiently out of alignment that the illumination is noticeably less than 100%. Moreover, even allowing that the illumination will be less than 100%, observers looking simultaneously from different locations on the Earth's surface see slightly different amounts of illumination because of the differences in their perspectives (that is, the angle at which they are viewing the illuminated Moon).


The Geometry of the Full Moon

The Full Moon occurs when the Moon is opposite the Sun in the sky. If one were to draw a line from the center of the Sun through the center of the Earth and extend it into the sky beyond, the zone immediately around the line would be surrounded by the Earth's shadow. Relative to the stars, this shadow makes a circuit about what is called the ecliptic (the Sun's track in the sky) once per year. The Moon makes a similar, but somewhat inclined circuit, once per month. Relative to the shadow point, it completes the 360° circuit in, on average, 29.53 days (called the "synodic period"). Once a month, somewhere or other along this path, it has to pass close to the Earth's shadow. In any particular month it can miss by as much as little over 5° to the north or south, or it can pass through the shadow (yielding a lunar eclipse).

The following diagram shows the relative diameters (in degrees) of the relevant features as observed by someone on the Earth's surface along the Sun-Earth line (that is an observer with the shadow directly overhead), based on the sizes and distances given in the NASA Moon Fact Sheet (the observer is assumed to be standing on the surface of a 6367 km radius Earth with the center to center distance from Earth to Moon set to its average value of 384,400 km).

Geometrically, the penumbra consists of a transition from no shadow to full shadow that is difficult to portray in the figure. The umbra, rather than being the full shadow expected geometrically, is actually filled with reddish light refracted by the Earth's atmosphere.

Because the Moon's orbit is inclined 5.15° with respect to the ecliptic, the Moon's track can pass north or south of the center of the Earth's shadow by that amount, or pass through it at an angle. The Full Moon is defined as the moment when the Moon, as seen by a geocentric observer, is directly above or below the anti-solar point in this diagram. If the path is inclined, as illustrated here, the closest approach will occur a little before or after that moment.

Full Moons are described by their percent illumination. This is not an actual measurement taking into account the possible variations due to lunar hills and valleys, but rather a mathematical construct representing the percent of the visible hemisphere that would be struck by sunlight if the Moon were a perfect sphere and the Sun a point source.

If one imagines a sphere with a radius equal to that of the Moon's orbit drawn around the Earth, then the shadow and lunar disks shown in the illustration correspond to real physical patches on that imaginary sphere: at a given moment, all observers anywhere on or near the Earth will see these in the same relative positions. However they will not all see the same illumination. This is because the lunar lighting always consists of a sunlit hemisphere pointed towards the Sun. Different observers will see this hemisphere from different angles, and hence they will see different amounts of the visible hemisphere in light.

If one regards the diagram as representing the view from a long ways away along the Sun-Earth line, then a line drawn from the center of the blue disk representing the sphere of the Moon towards the sun would give a dot in the exact center representing the subsolar point. The geocentric observer is viewing the sphere off this axis by the angle p, so he sees the illuminated hemisphere tipped slightly away from his line of sight, with a bit of dark unlit side visible on the side towards the p arrow, and full sunlight on the side away from it. The theoretical percent illumination, PI, is related to p (which can be regarded as the phase angle at the sub-observer point on the Moon at that moment) by:


For the geocentric observer, the maximum illumination occurs at the moment of closest approach, when the angular offset p reaches its minimum value, represented in the diagram by the symbol d.

If d is less than half the sum of the penumbral and lunar disk diameters a lunar eclipse will result. Note that if the Moon's track is inclined and does not pass precisely through the center of the shadow the moment of the greatest eclipse will be different from the moment of official Full Moon.

Another way of saying this is that each observer has their own anti-solar point (different from the geocentric one defining the center of the Earth's shadow), and the percent illumination they see is governed by the approach of the Moon to their personal anti-solar point as seen from their location.

The greatest shift due to this parallax effect occurs when the observer sees the Moon low on the horizon, because under such circumstances they are as far as possible from the Earth-Moon line.

As a result of these considerations, it should be apparent that:

Very small differences in lighting geometry can spell the difference between a Moon that looks uniformly "full" under telescopic scrutiny and one that does not. The misalignments between Moon and Sun that can be detected around the time of Full Moon are, surprisingly, much smaller than 7° or so of misalignment to make an illuminated crescent visible in the twilight sky at around the time of New Moon.

The thumbnail on the left shows a north-up version of a very Full Moon photographed from Tokyo by the National Astronomical Observatory of Japan on July 5, 2001 at 12:03 UT (click to see full sized image -- note that the original is south up). The official moment of geocentric Full Moon (obscured by a lunar eclipse) was at 15:04 UT. The photo was taken 8 minutes before the Moon entered the penumbra of the Earth's shadow. The visible disk was 99.980% illuminated at the time of the photo. The thumbnail on the right shows a similar Full Moon photographed by Mario Weigand on March 25, 2005 at 22:09 UT. Geocentric Full Moon had occurred at 20:59 UT. The Moon was 99.985% illuminated at the time of the photo.

In both cases a small blue plus marks the center of the lunar disk as seen by the observer (the "sub-Earth point"), and a small yellow plus marks the subsolar point -- the point where a line drawn from the center of the Moon to the Sun would penetrate the surface. In the NAOJ photo the Sun's rays are coming from 1.6° to the southeast of center; in Mario's photo they are coming from 1.4° to the northwest of center. For ease of comparison, the freeware Lunar Terminator Visualization Tool has been used to adjust the two images to identical scales and orientations, but has not been used to alter the original librations.

The following thumbnails show the subtle differences in shading that result from these slight differences in lighting. Click the thumbnails for full sized images, and open them in separate browser tabs or windows to blink between them on the screen.

The fact that the NAOJ image (left) is not quite full is revealed by crater shadings in the northwest quadrant (the side opposite the sub-solar point, and closest to the center of the Earth's shadow). In particular, the crater Pythagoras is easily seen as an elliptical feature with a central peak about midway along the arc of the limb. The same crater is barely visible as an albedo marking in Mario's image (right), where the shading appears on the opposite limb.

The reverse is true when looks in the southeast. The NAOJ image (left) shows only the albedo markings of dark-floored Oken and neighboring parts of Mare Australe. Mario's image (right), by contrast, shows Humboldt, Hecataeus and other craters as bright-dark relief structures near the limb beyond the bright patch of Stevinus. Because of a difference in librations, these craters are actually a bit farther onto the disk in the NAOJ photo, but they are invisible because of the subtle difference in "fullness".

A photo showing the Moon in a similar state of "fullness" to these two examples was obtained at Yerkes Observatory just before the eclipse of March 13, 1960. In was included as Plate Y842 in the Consolidated Lunar Atlas. The photo was taken 17 minutes before the Moon began entering the penumbra of the Earth's shadow. The visible disk was 99.983% illuminated. The official moment of geocentric Full Moon was at 08:26 UT.

It is interesting to note that although Mario's photo has the highest percent illumination of any of these examples (that is, it shows the Moon in closest alignment with the Sun), this was true only from his non-geocentric viewpoint; and although very close, the Moon did not pass even partially through the penumbra of the Earth's shadow on that occasion.