Atlas, with Rimae Atlas on its floor 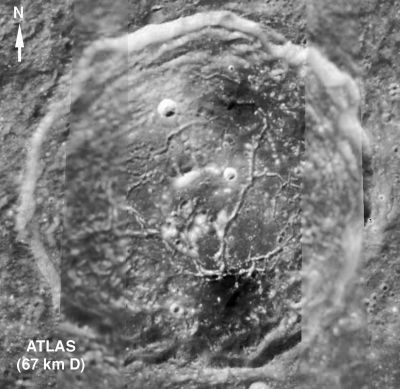 Orbital close-up photograph of Atlas made by the temporary lunar orbiter Clementine (1994).
Atlas is one of several pronounced craters on the moon's near and far sides which show curious cobweb-shaped systems of rilles on their floor.
The rilles on the floor of Atlas have been known as Rimae Atlas I, II, III, IV, and V.

(IAU Directions) ATLAS.--This, and its companion Hercules on the W., form under oblique illumination a very beautiful pair, scarcely surpassed by any other similar objects on the first quadrant. Its lofty rampart, 55 miles in diameter, is surmounted by peaks, which on the N. tower to an altitude of nearly 11,000 feet. It exhibits an approach to a polygonal outline, the lineal character of the border being especially well marked on the N. The detail on the somewhat dark interior will repay careful scrutiny with high powers. There is a small but distinct central mountain, south of which stands a number of smaller hills, forming with the first a circular arrangement, suggestive of the idea that they represent the relics of a large central crater. Several clefts may be seen on the floor under suitable illumination, among them a forked cleft on the N.W. quarter, and two others, originating at a dusky pit of irregular form situated near the foot of the S.W. wall, one of which runs E. of the central hills, and the other on the opposite side. A ridge, at times resembling a light marking, extends from the central mountain to the N. border. During the years 1870 and 1871 I bestowed some attention on the dusky pit, and was led to suspect that both it and the surrounding area vary considerably in tone from time to time. Professor W.H. Pickering, observing the formation in 1891 with a 13 inch telescope under the favourable atmospheric conditions which prevail at Arequipa, Peru, confirmed this supposition, and has discovered some very interesting and suggestive facts relating to these variations, which, it is hoped, will soon be made public. On the plain a short distance beyond the foot of the glacis of the S.W. wall, I have frequently noted a second dusky spot, from which proceeds, towards the W., a long rill-like marking. On the N. there is a large formation enclosed by rectilineal ridges. The outer slopes of the rampart of Atlas are very noteworthy under a low sun.

L72: Explosive volcanic pits on the floor of Atlas.