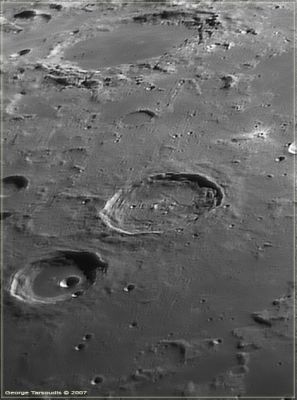 George Tarsoudis Hercules is at the bottom, Atlas is in the middle and Endymion is at the top.

Hercules is the smaller of the Greek hero two-some in this part of the Moon, and it has a flat floor.

(IAU Directions) HERCULES.--The western companion of Atlas, a fine ring-plain, about 46 miles in diameter, with a complex border, rising some 11,000 feet above a depressed floor. There are few formations of its class and size which display so much detail in the shape of terraces, apparent landslips, and variation in brightness. In the interior, S.W. of the centre, is a very conspicuous crater, which is visible as a bright spot when the formation itself is hardly traceable, two large craterlets slightly N. of the centre, and several faint little spots on the west of them. The latter, detected some years ago by Herr Hackel of Stuttgart, are arranged in the form of a horse-shoe. There are two small contiguous craters on the S.W. wall, one of which, a difficult object, was recently detected by Mr. W.H. Maw, F.R.A.S. The well-known wedge-shaped protuberance on the S. wall is due to a large irregular depression. On the bright inner slope of the N. wall are manifest indications of a landslip.