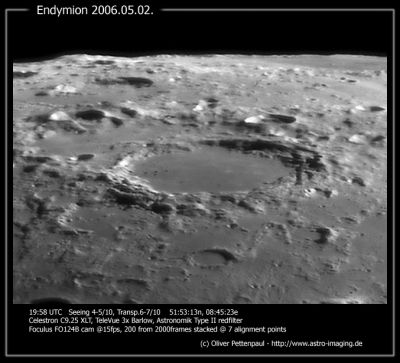 Oliver Pettenpaul Endymion is the large flat-floored crater in the center.

(IAU Directions) ENDYMION.--A large walled-plain, 78 miles in diameter, enclosed by a lofty, broad, bright border, surmounted in places by peaks which attain a height of more than 10,000 feet above the interior, one on the E. measuring more than 15,000 feet. The walls are much terraced and exhibit two or three breaks. The dark floor appears to be devoid of detail. Schmidt, however, draws two large irregular mounds W. of the centre, and shows four narrow light streaks crossing the interior nearly parallel to the longer axis of the formation.

Endymion as a greyish pancake on SLC-B1

An ancient large crater between Endymion and De La Rue?

A Skating Rink with Bumps.
A Non-crater
Another Basin on Another Limb
8” Marvel
NE Backwater
A Wonderful Corner
Zoroaster
A New Mare to Study
Oddities (Endymion and the couple Atlas-Hercules before local sunset)