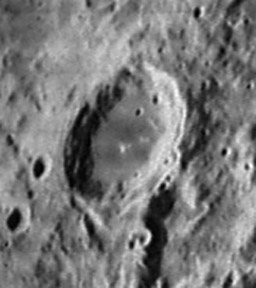 (IAU Directions) MERCURIUS.--This formation is 25 miles in diameter. A small crater stands on the S.W. section of the wall. There is a longitudinal range in the interior, and on the E. and N.E. the remains of two large walled-plains, the more easterly of which is a noteworthy object under suitable conditions. A short distance S. is a large, irregular, and very dark marking. On the N., lies an immense bright plain, extending nearly to the border of Endymion.

The ESE-WNW tendency of the region surrounding Mercurius