(current IAU name; formerly known as Mare Struve and before that Struve) 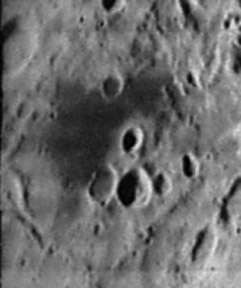 LPOD Photo Gallery Lunar Orbiter Images Apollo Images
- Lacus Spei was captured on Apollo 16's color-Hasselblad AS16-122-19606. In this frame, the camera was looking west-northwest. Crater Gauss is noticeable in the foreground, while the dark Lacus Spei is seen near the curved horizon. It is worthwile to compare this photograph with LAC-28 in the Clementine Atlas.
- Research: Danny Caes.

IAU Directions STRUVE.--A small irregularly-shaped formation, open towards the S., forming one of the curious group of unsymmetrical enclosures associated with Messala. Its dark floor and a small dusky area on the N. indicate its position under a high sun.