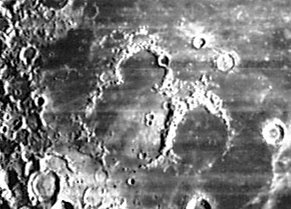 (IAU Directions) OTTO STRUVE.--An enormous enclosure, bounded on the W. by the Hercynian Mountains, and on the E. by a mountain chain of considerable altitude, surmounted by three or more bright little rings. On the E. side of the uneven-toned interior, which, according to Madler, includes an area of more than 26,000 square miles, stand four craters, several little hills, and light spots. On the E. is the much more regular and almost as large formation, Otto Struve A, the E. border of Otto Struve forming its W. wall. This enclosure is bounded elsewhere by a very low, broken, and attenuated barrier. At sunrise the W. and E. walls, with the mountain mass at the N. end, which they join, resemble a pair of partially-opened calipers. There is one conspicuous little crater on the E. side of the floor; and, at or near full moon, four or five white spots, nearly central, are prominently visible.

Note: on January the 27th of 1822, a certain Struve observed some sort of luminescence in the vicinity of crater Aristarchus, see page 238 in Mysterious Universe, a handbook of astronomical anomalies (W.R.Corliss, The Sourcebook Project, 1979), in the article Lunar Luminescence (E.J.Flamm, Nature, 1965).