Bailly Basin (with Wilkins's Hare on its floor) 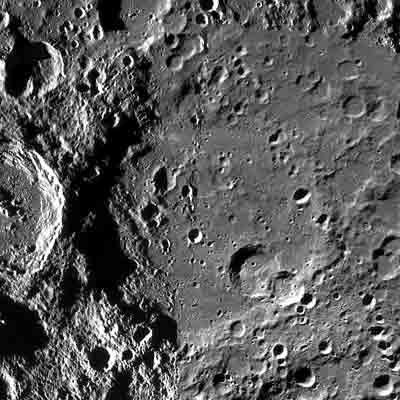 (IAU Directions) BAILLY.--One of the largest wall-surrounded plains on the moon, almost a "sea" in miniature, extending 150 miles from N. to S., and fully as much from E. to W. When caught at a favourable phase, it is, despite its position, especially worthy of scrutiny. The rampart on the E., of the linear type, is broken by several bright craters. On the S.E. two considerable overlapping ring-plains interfere with its continuity. On the S.W. several very remarkable parallel curved valleys traverse the border. The W. wall, which at one point attains a height of nearly 15,000 feet, is beautifully terraced. The floor on the western side includes several ring-plains (some of which are of a very abnormal type), many ridges, and two delicate dark lines, crossing each other near the S. end, probably representing clefts.

A Little Basin.
Half a Loaf.
Southwest Taper.
Especially Worthy of Scrutiny
Red & Blue on the Limb (Anaglyph)