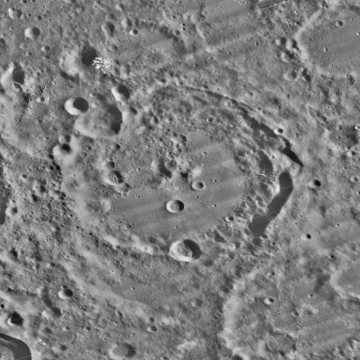 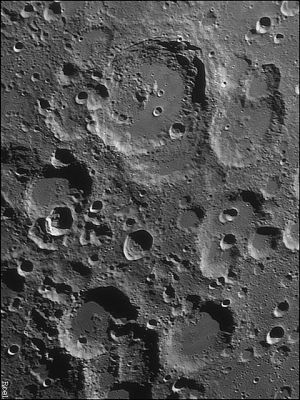 (IAU Directions) MAUROLYCUS.--This unquestionably ranks as one of the grandest walled- plains on the moon's visible surface, and when viewed under a low sun presents a spectacle which is not easily effaced from the mind. Like so many of the great enclosures in the fourth quadrant, it impresses one with the notion that we have here the result of the crowding together of a number of large rings which, when they were in a semi-fluid or viscous condition, mutually deformed each other. It extends fully 150 miles from W. to E., and more from N. to S.; so it may be taken to include an area on the lunar globe which is, roughly speaking, equal to half the superficies of Ireland. This vast space, bounded by one of the loftiest, most massive, and prominently-terraced ramparts, includes ring-plains, craters, crater-rows, and valleys,--in short, almost every type of lunar formation. It towers on the W. to a height of nearly 14,000 feet above the interior, and on the E., according to Schmidt, to a still greater altitude. A fine rill-valley curves round the outer slope of the E. wall, just below its crest, which is an easy object in a 8 1/2 inch reflector when the opposite border is on the morning terminator, and could doubtless be seen in a smaller instrument; and there is an especially brilliant crater on the S. border, which is not visible till a somewhat later stage of sunrise. The central mountain is of great altitude, its loftiest peaks standing out amid the shadow long before a ray of sunlight has reached the lower slopes of the walls. It is associated with a number of smaller elevations. I have seen three considerable craters and several smaller ones in the interior.