Hevelius, with Rimae Hevelius on its floor 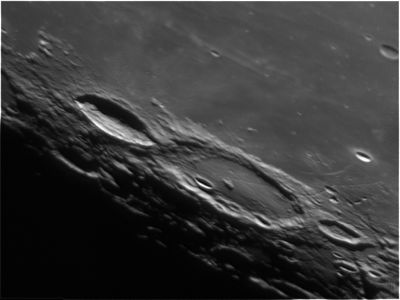 (IAU Directions) HEVEL.--A great walled-plain, 71 miles in diameter, adjoining Lohrmann on the N., with a broad eastern rampart, rising at one peak to a height above the interior of nearly 6,000 feet, and presenting a steep bright face to the Oceanus Procellarum. There are three prominent craters near its crest, and one or two breaks in its continuity. It is not so lofty and is more broken on the W., where three conspicuous craters stand on its inner slope. The floor is slightly convex, and includes a triangular central mountain, on which there is a small crater. The S. half of the interior is crossed by four clefts: (l) running from a little crater N. of the central mountain, on the E. side of it, to a hill at the foot of the S.E. wall; (2) originating near the most southerly of the three craters on the inner slope of the W. wall, and crossing 1, terminates at the foot of the E. wall; (3) has the same origin as 2, crosses 1, and, passing over a craterlet E. of the central mountain, also runs
up to the E. wall at a point considerably N. of that where 2 joins the latter; (4) runs from the craterlet just mentioned to the E. end of 2.