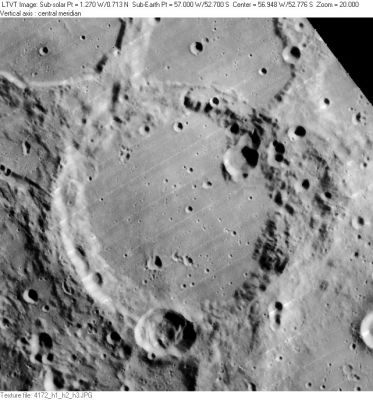 (IAU Directions) PHOCYLIDES.--This extraordinary walled plain, with its neighbouring enclosures, is structurally very remarkable and suggestive. It consists of a large irregular formation, with a lofty wall, flanked on the N. by a smaller and still more irregular enclosure (b), the floor of which is 1,500 feet above that of Phocylides, the line of partition being a high cliff, probably representing a "fault," whose shadow under a low sun is very striking. Phocylides is about 80 miles in maximum length, or, if we reckon the small enclosure b to form a part of it, more than 120 miles. The loftiest peak, nearly 9,000 feet, is on the E. border, near the partition wall. The continuity of the rampart is broken on the S. by a large crater. There is a bright ring-plain on the E. side of the floor, and a few small craters. Phocylides b has only a solitary crater within it. Phocylides C, abutting on the E. flank of Phocylides, is about 26 miles in diameter. Its somewhat dusky interior is devoid of detail, but the outer slope of its E. wall is crowded with a number of minute craters, which, under good conditions, may be utilised as tests of the defining power of the telescope used. Phocylides A, on the bright S.E. plain, is a large deep crater with a fine crater-row flanking it on the E.