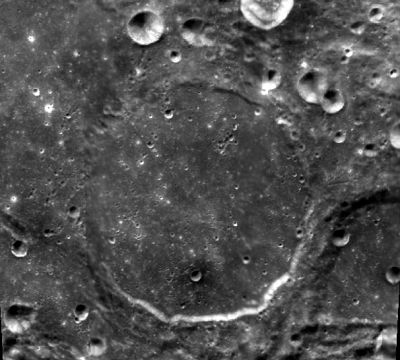 Left: Clementine Wargentin is in the center, with areas where the crater flooding has overtopped the rim evident on the west and northwest. The crater Nasmyth is partially visible in the lower right. Right: Oliver Pettenpaul In this Earth-based view, Wargentin is seen at a very low sun angle, along the terminator. The "bird's foot" pattern on the surface (referred to by Elger) is evident, and the shadows cast by the remnants of the rim in the southeast indicate they stand about 1 km above the floor. To their right is the crater Nasmyth and diagonally below that, Phocylides. A small part of the large crater Schickard can be seen along the top margin.

(IAU Directions) WARGENTIN.--A most remarkable member of the Phocylides group, flanking the S.W. side of Schickard. Unlike the majority of lunar formations, its floor is raised considerably above the surrounding region, so that it resembles a shallow oval dish turned upside down. It is 54 miles in diameter, and, except on the S.E. (where it abuts on Phocylides b, and for some distance is bounded by its wall), it has only a border of very moderate dimensions. On the N.W. slope of this ghostly rampart I have seen a distinct little crater, and two much larger depressions on the N.E. slope. There are some low ridges on the floor, radiating from a nearly central point, which have been aptly compared to a bird's foot.

L43: A crater filled to the rim with lava or ejecta.