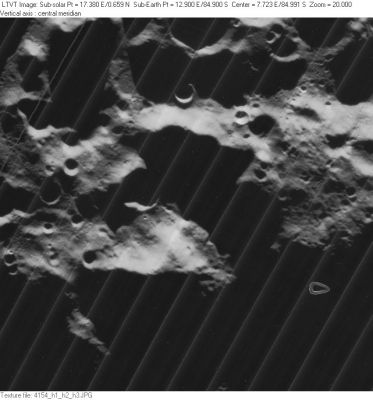 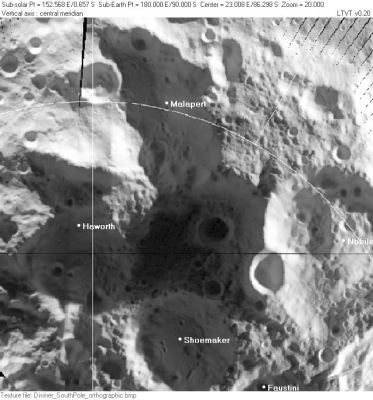 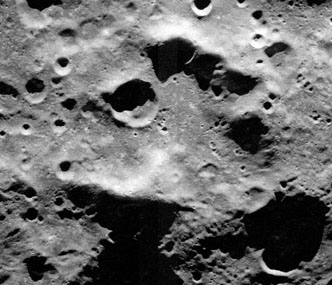 Left: Overhead view by LO-IV-154H The brightly lit ridges above and below the center of this image are the north and southwest rims of Malapert. Because the Sun strays just 1½ degrees north and south of the Moon's equator, craters at high latitudes are always seen at low sun angles, and their floors are in perpetual darkness.
Middle: Infrared temperature map from the Diviner instrument on LRO, with the principal IAU names. The area between Haworth and Nobile does not appear to be regarded as part of Malapert. Topographic maps of the south pole are helpful for understanding the relative depths of these features.
Right: Earth-based radar view by Campbell et al. When the librations are favorable, the Moon's south pole can tip towards Earth by more than 7 degrees. Hence, as shown here, radar waves transmitted from Earth can illuminate more of Malapert's floor than can sunlight (note: in the LPOD image from which this has been cropped, the Earth-based radar data was re-mapped to a north-up aerial view).

LPOD Photo Gallery Lunar Orbiter Images
- Although it is not mentioned in the LPI's search-list of orbital Apollo photographs, the crater called Malapert WAS photographed during the mission of Apollo 15. It was captured near the central part of the upper margin of frame AS15-95-12988 (near the terminator). Malapert could be the most southern crater which was once photographed during the Apollo project. A High-Resolution scan of AS15-95-12988 is needed!
- Research: Danny Caes.

(IAU Directions) MALAPERT.--A ring-plain situated far too near the limb for useful observation. Between it and Newton is a number of abnormally shaped enclosures.