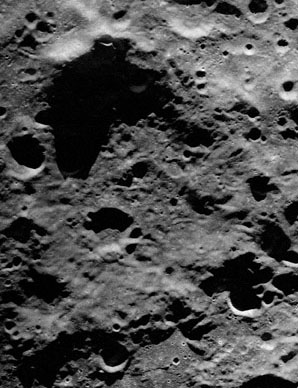 Earth-based radar view by Campbell et al.: Cabeus is the large, somewhat irregular depression filling most of the frame. When the librations are favorable, the Moon's north pole can tip towards Earth by more than 7°. Hence radar waves transmitted from Earth can illuminate more of Cabeus' floor than can sunlight, which never shines from more than 1½° north of the Moon's equator. Note: in the LPOD image from which this has been cropped, the Earth-based radar data was re-mapped to a north-up aerial view, that is, the Earthward direction (from which the radar waves emanate) is to the top. The circular crater to the left of center, near the bottom of this view, has been named Ibn Bajja.

(IAU Directions) CABEUS.--Another object out of the range of satisfactory scrutiny. Madler considered that it is as deep as Newton. According to Neison, a central peak and two craters can be seen within under favourable conditions. Schmidt draws a long row of great depressions on the N. side of it.