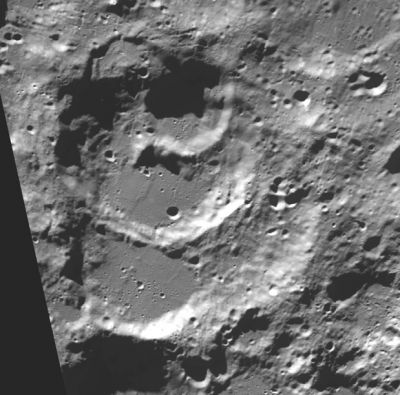 Clementine In this complicated cluster of craters Newton is the moderate sized circular crater near the top with a small peak at its center. It overlays smooth-floored 67-km Newton G on the south; and is overlain by Newton D, the 37-km circular crater inside the northeast rim. 64-km Newton A completes the line of large overlapping craters visible from Earth. It is cut off at the bottom of this image, with just the shadowed inner wall of its north rim showing. The little half-moon scallop on Newton's northwest rim is unnamed; nor does the broad bumpy extension to Newton's southeast appear to be part of any named crater.

(IAU Directions) NEWTON.--Is situated on the S.W. side of Short, and is the deepest walled-plain on the visible surface. It is of irregular form and about 143 miles in extreme length. One gigantic peak on the W. rises to nearly 24,000 feet above the floor, the greater part of which is always immersed in shadow, so that neither the earth or sun can at any time be seen from it.

The Bottom of the World, Upside Down.
Mountains Near the South Pole.
Sliced in Half
Ring Eclipse
On Top of the World
What's in a Name?