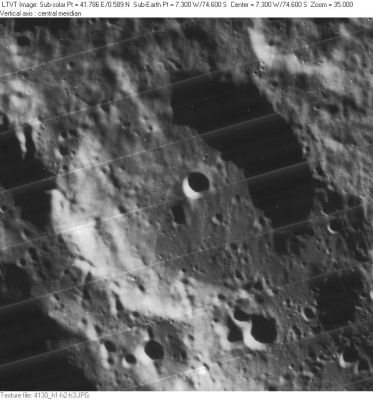 LO-IV-130H Short is regarded as overlaying 71-km diameter Short B, a somewhat vague structure on the lower right. The circular crater on the floor is unnamed.

(IAU Directions) SHORT.--A fine but foreshortened ring-plain of oblong shape, squeezed in between Moretus and Newton. It is about 30 miles in diameter, and on the S.W., where its border and that of Newton are in common, it rises nearly 17,000 feet above the interior, which includes, according to Neison, a small central hill. Schmidt shows a crater on the N. side of the floor.

On Top of the World

Note: these strange articles are from the days when a natural satellite in orbit around Venus was still seen as a possibility... (or perhaps not?). Anyway, the observing eyes of lots of professional and amateur astronomers were glued to the eyepieces of their telescopes. Perhaps a bit too much glued, because most of them didn't observe the supposed "natural" satellite (called "Neith"), but... rather the unexpected ghost image of the bright Venus itself, reflected between the lenses of the telescope's eyepiece! (a visual side effect created by poor optics, or...??). - DannyCaes Apr 19, 2015
- We could ask questions about telescopic observers of binary and multiple star systems. Were they really observing binary and multiple stars, or were most of them just adjacent ghost images of singular bright stars? - DannyCaes Apr 19, 2015