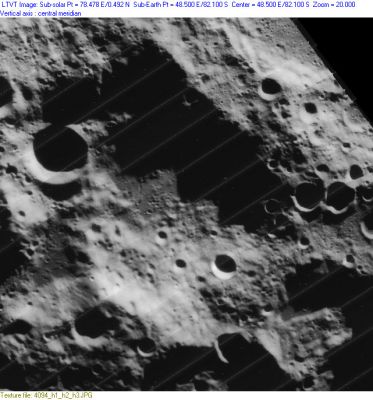 LPOD Photo Gallery Lunar Orbiter Images
- Although it is not mentioned in the LPI's search-list of orbital Apollo photographs, the crater called Scott WAS photographed during the mission of Apollo 15. It was captured near the central part of the upper margin of frame AS15-95-12988.
- Research: Danny Caes.

The shadows in LO-IV-094H (as measured by LTVT) indicate height differences of up to 6,860 m from the ridge on the northern wall to the crater floor. But there is a considerable element of luck in finding shadows that span the most appropriate points. For example, in this case, the highest point along the NE ridge is near the apex of the inverted-V in LO-IV-094H, and the azimuth of the sun was such that this point did not cast a shadow onto the crater floor.

the shadow did fall on the crater floor, and LTVT found a drop of 8,660 m. Click on the image at left for further details. This shadow measurement may be compared to the result expected on the basis of elevations listed in the Unified Lunar Control Network-2005, which suggests that height differences of up to 9,300 m might be expected.

The height difference of 8,660 m is already quite respectable, as is 6,860 m. The tallest mountains on Earth reach little more than 5,000 m above the surrounding terrain (see the "Comparisons" section of the Wikipedia article regarding Mount Everest). So the ascent from the floor of Scott to this high point on the north rim would be quite arduous.

J. L. Scott and double star observations
Not at all related to Captain Robert Falcon Scott, but... could somebody tell me more about a certain J.L.Scott who seems to have been a double star observer? J.L.Scott is briefly mentioned in the SKY CATALOGUE 2000.0, Volume 2 (page X; Table I, Double Star Designation Codes). - DannyCaes Jul 31, 2015