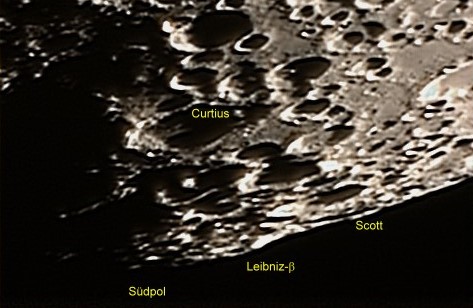 Helmut Groell The "Leibnitz Beta" of Whitaker (1954, see below) is labeled. This appears to have been "Leibnitz e" in Schröter's original drawing of the range. 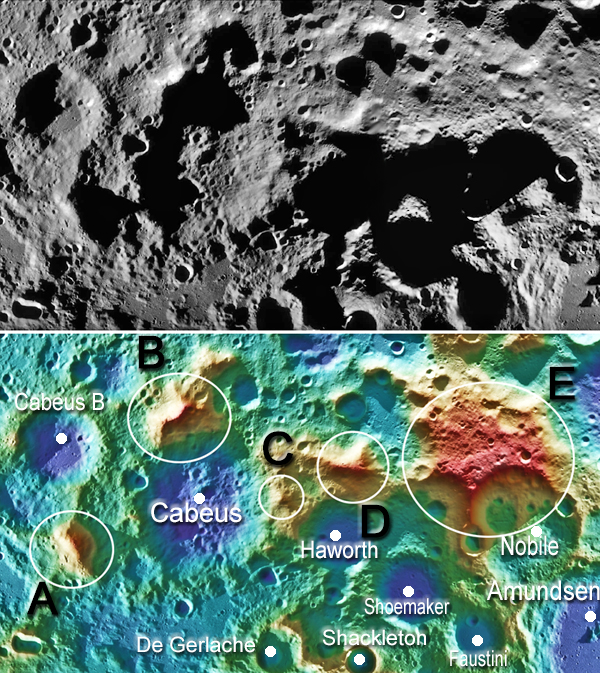 Top and Botttom: LROC views of the mountains A, B, C, D and E as seen by Schröter (see also images in Schröter's Observations section below). - JohnMoore2

(IAU Directions) LEIBNITZ MOUNTAINS.-- On the S. limb extending E. from S. lat. 80 deg. beyond the Pole on to the Fourth Quadrant. Perhaps the loftiest range on the limb. Madler's measures give more than 27,000 feet as the height of one peak, and there are several others nearly as high.

Johann Schröter, name-giver to the Leibnitz Mountains, was a meticulous observer who left careful records of his observations, including the date and time at which they were made, and such things as a record of the observed librations by means of noting how far Plato and Grimaldi were offset from the limb. The date and time makes it easy to reconstruct what he must have seen based on data on the shape of the Moon's surface returned by instruments on the Kaguya and LRO spacecraft.

In the case of the Leibnitz peaks, Schröter's initial observation was on December 2, 1789 at about 18:00 UT, at which time he saw four relatively prominent peaks along the Moon's limb. He called these Leibnitz a, b, d, and e (from west to east), noting that a straight line from Mare Nubium through Tycho crossed the limb at Leibnitz d (which he sometimes calls "Delta"). He also carefully recorded the width and spacing of the peaks (as well as their heights), and noted a small fifth peak, c, between b and d. This careful description unambiguously identifies the peaks as shown in the simulation at left below. This is "unrolled" into an aerial view in the final image, where the locations of the features producing the labeled peaks in the first two simulations is indicated relative to modern IAU-named features (represented by a gray-scale version of the topographic heights, white being high, and black low). The blue line is the theoretical limb, with most of the area above the line visible from Earth.

Note: the preceding was based entirely on a reading, by a person with little knowledge of German, of the verbal description in the on-line scan of Volume 1 of Schröter's book. The words refer to Fig. 7 in plate T. IV, in which Schröter illustrated these observations. Reproductions of that plate, and of the text of Volume 2, do not appear to be available on-line, however a scan of T. IV has recently been made available by Nigel Longshaw, and it confirms that the drawing, and its lettering, closely match the simulation (although rotated 180°). An examination of the following drawing in plate T. IV reveals that although the identification of the "a".."e" of Fig. 7 with Whitaker's named features is correct, Schröter attached little significance to the letters: in Fig. 8 of T. IV, the letters "a".."e" are used again, but placed in the opposite order. Therefore, the letters used to label individual peaks in Schröter's "Montes Leibnitii" (their designation in Fig. 7) should not to be taken as permanent names identifying specific features (as Whitaker's are), but only as convenient markers for use within the context of the image on which they appear. In Volume 2, Schröter appears to have made extensive observations of the polar cusps of lunar crescents (see Plates TLXV, TLXVI and TLXXIV), and may well have introduced additional, or different, nomenclature in connection with them. Schröter also appears to have traced the south polar limb profile, silhouetted against the solar disk, labeling the peaks he saw during an eclipse (TLXIII).- JimMosher