Copernicus - the Monarch of the Moon 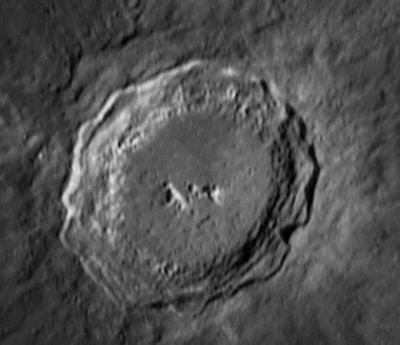 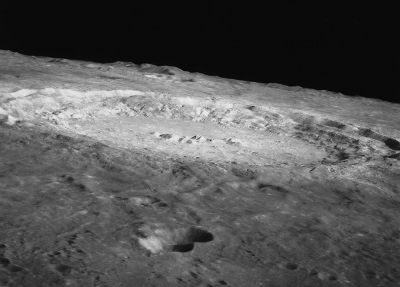 - AS15-M-2589 and its preceding and following photographs in Apollo 15's MAGAZINE REV-71 show Copernicus near the curved horizon. Because the sun was too high at the moment of photography, there were no shadows in and around the crater.
- AS12-47-6875 and the almost identical looking AS12-47-6876 are two of the most frequently reproduced orbital Hasselblads of Copernicus (near the curved horizon) and Reinhold (in the foreground).
- The so-called "Picture of the Century" (Copernicus's cluster of central peaks and its northern inner slopes, photographed by Lunar Orbiter 2), was included on pages 231-232-233 in the NATIONAL GEOGRAPHIC of february 1969 (AWESOME VIEWS OF THE FORBIDDING MOONSCAPE; a nine-page portfolio). And on page 244 of the same issue, there's a remarkable detailed close-up of Copernicus's floor, made by Lunar Orbiter 5 (see LO-5150 to LO-5157).
- One of Chesley Bonestell's extraordinary paintings shows crater Copernicus with four astronauts on its southern rim. This painting was inspired by the so-called "Picture of the Century" (see description above). Bonestell's painting of Copernicus is online in one of Fabio Femino's Fantascienza-pages. See: Paesaggio Lunare (the fifth painting on that page).
- Another one of Chesley Bonestell's Copernicus-paintings was printed in Willy Ley's book The Conquest of Space (1951). This painting shows the floor of Copernicus as seen from a high summit on its eastern wall. In the Dutch translation of this book (De Sprong in het Heelal, 1951) this painting was printed as Plate XXIVa, between pages 38 and 39.
- Lunar Orbiter 5's Frame 148 shows a close-up of the dark-halo craterlet Copernicus H (southeast of Copernicus itself).
Research photographs and paintings: Danny Caes 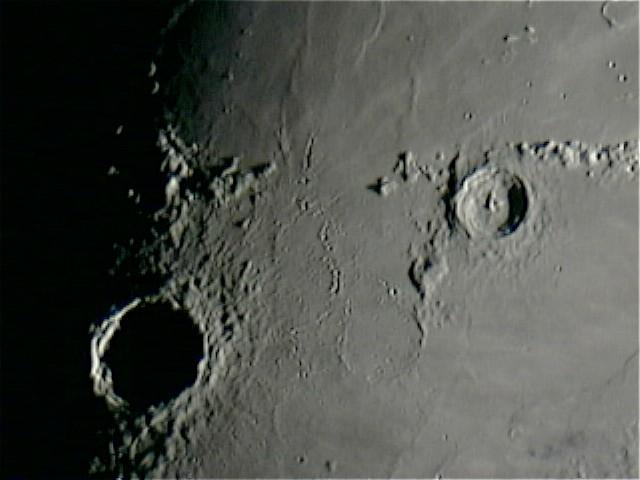 (IAU Directions) COPERNICUS.--This is without question the grandest object, not only on the second Quadrant, but on the whole visible superficies of the moon. It undoubtedly owes its supremacy partly to its comparative isolation on the surface of a vast plain, where there are no neighbouring formations to vie with it in size and magnificence, but partly also to its favourable position, which is such, that, though not central, is sufficiently removed from the limb to allow all its manifold details to be critically examined without much foreshortening. There are some other formations, Langrenus and Petavius, for example, which, if they were equally well situated, would probably be fully as striking; but, as we see it Copernicus is par excellence the monarch of the lunar ring-mountains. Schmidt remarks that this incomparable object combines nearly all the characteristics of the other ring-plains, and that careful study directed to its unequalled beauties and magnificent form is of much more value than that devoted to a hundred other objects of the same class. It is fully 56 miles in diameter, and, though generally described as nearly circular, exhibits very distinctly under high powers a polygonal outline, approximating very closely to an equilateral hexagon. There are, however, two sections of the crest of the border on the N.W. which are inflected slightly towards the centre, a peculiarity already noticed in the case of Eratosthenes. The walls, tolerably uniform in height, are surmounted by a great number of peaks, one of which on the E., according to Neison, stands 11,000 feet above the floor, and a second on the opposite side is nearly as high. Both the inner and outer slopes of this gigantic rampart are very broad, each being fully 10 miles in width. The outer slope, especially on the W., is a fine object at sunrise, when its rugged surface, traversed by deep gullies, is seen to the best advantage. The terraces and other features on the bright inner declivities on this side may be well observed when the sun's altitude is about 6 deg. Schmidt, whose measures differ from those of Neison, estimates the height of the wall on the W. to be 12,000 feet, and states that the interior slopes vary from 60 deg. to 50 deg. above, to from 10 deg. to 2 deg. at the base. The first inclination of 50 deg., and in some cases of 60 deg., is confined to the loftiest steep crests and to the flanks of the terraces. There are apparently five bright little mountains on the floor, the most westerly being rather the largest, and a great number of minute hillocks on the S.W. quarter. S.E. of the centre is a little crater, and on the same side of the interior a curious hook-shaped ridge, projecting from the foot of the wall, and extending nearly halfway across the floor. The region surrounding Copernicus is one of the most remarkable on the moon, being everywhere traversed by low ridges, enclosing irregular areas, which are covered with innumerable craterlets, hillocks, and other minute features, and by a labyrinth of bright streaks, extending for hundreds of miles on every side, and varying considerably both in width and brilliancy.

The notable crater-row on the E., often utilised by observers for testing the steadiness of the air and the definition of their telescopes, should be examined when it is on the morning terminator, at which time Webb's homely comparison, "a mole-run with holes in it," will be appreciated, and its evident connection with the W. side of Stadius clearly made out. There is another much more delicate row running closely parallel to this object; it lies a little E. of it, and extends farther in a northerly direction.

Copernicus C and D are (or were?) both number five in the list of 12 localities in the Lunar Ellipse of Fire (see article from Farouk El-Baz in Sky and Telescope - June 1973).