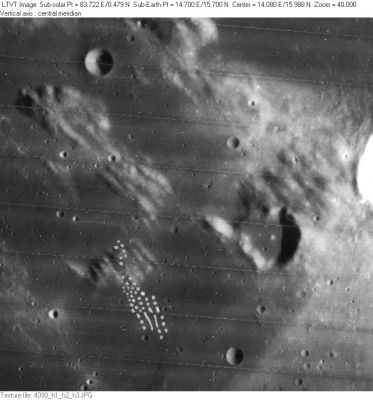 LO-IV-090H The fluted hills in this area just west of Menelaus (whose sunlit west rim interrupts the right margin) are an example of the Imbrium Sculpture. They have been raked in a direction radial to the center of Mare Imbrium. The shadowed crater to the right of center is Daubrée. Two of Menelaus's satellites are also visible: 7-km Menelaus A in the upper right and 4-km Menelaus C near the bottom. The dark region in the upper right is a small part of the floor of Mare Serenitatis, while the similarly-dark regions to the left and bottom are regarded as parts of Lacus Gaudii and Lacus Hiemalis.

Radiating Linears, A Long Line in a Clutter of Magnificence