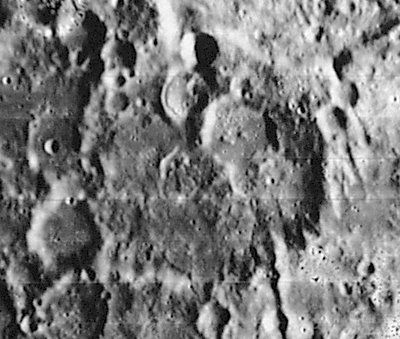 LOIV 101 H2 Parrot is the large irregular formation in the middle of this frame. The round half-shadowed crater at top center is Parrot R. The larger crater to its southeast, on the floor of Parrot, is Parrot D. The two equally large craters in the lower left corner are Parrot A (top) and Parrot E (bottom).

(IAU Directions) PARROT.--An irregularly-shaped formation, 41 miles in diameter, S. of Albategnius, with a very discontinuous margin, interrupted on every side by gaps and depressions, large and small; the most considerable of which is the regular ring-plain Parrot a, on the W. An especially fine valley, shown by Schmidt to consist in part of large inosculating craters, cuts through the wall on the S.E., and runs on the W. side of Argelander towards Airy. The floor of Parrot is very rugged.

Loro Basin, and an unknown swirl