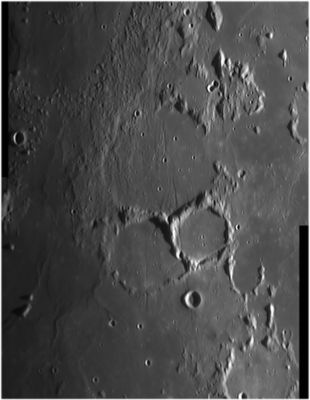 Mick Hyde Fra Mauro is the large enclosure above center. The two interlocking craters below it are Bonpland (left) and Parry (right). The crater in the extreme lower right corner is Guericke.

(IAU Directions) FRA MAURO.--A large enclosure of irregular shape, at least 50 miles from side to side, abutting on Parry and Bonpland. In addition to the cleft which crosses it, the floor is traversed by a great number of ridges, and includes at least seven craters.

Fra Mauro is (or was?) number six in the list of 12 localities in the Lunar Ellipse of Fire (see article from Farouk El-Baz in Sky and Telescope - June 1973).