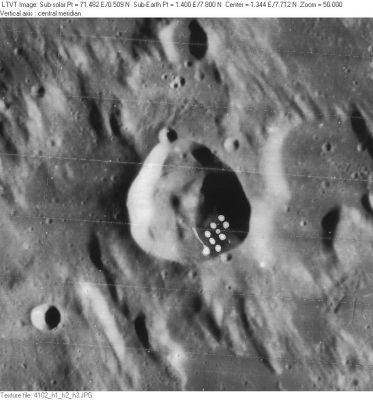 LO-IV-102H The white dots over the southwest wall of Ukert are flaws in the Lunar Orbiter on-board development. 26-km Ukert M is the circular enclosure touching the right margin. Immediately above Ukert is 21-km Ukert B with the deeper 9-km Ukert A above that. The 6-km crater in the lower left is Pallas N.

(IAU Directions) UKERT.--This bright crater, 14 miles in diameter, situated in the region N.W. of Triesnecker, is surrounded by a very complicated arrangement of mountains; and on the N. and E. is flanked by other enclosures. It has a distinct central mountain. Its most noteworthy feature is the great valley, more than 80 miles long, which extends from N.W. to S.E. on the W. side of it. This gorge is at least six miles in breadth, of great depth, and is only comparable in magnitude with the well-known valley which cuts through the Alps, E. of Plato. A delicate cleft, not very clearly traceable as a whole, begins near its N. end, and terminates amid the ramifications of the Apennines S. of Marco Polo.