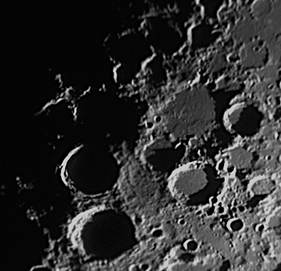 Ron Bee "Lunar X" photographed on 11/17/2007 at 02:26 UT. The "X" is the pattern to the left of the terminator in the upper left. The deeply shadowed craters below the "X" are Werner (top) and Aliacensis (bottom). To the right of the "X", the large low-walled plain is Playfair G, with 47-km Playfair (two-thirds covered by shadow) to its right. The 63-km diameter crater below Playfair G is Apianus.

(click to see a larger version) show the relatively subtle changes in the pattern that occur as the sun angle increases by about 0.2º (although taken 41 years apart, this pair of images corresponds to the change that occurs each lunation in an interval of about 30 minutes). The final image in the row shows the underlying features that give rise to the pattern, as seen when the Sun is much higher. The shadowed crater on the left is Purbach, while on its right is Blanchinus (cut in half by the right margin). Above them, cut by the top margin, is La Caille. (note: the freeware LTVT software has been used to re-map all three photos to an identical zero-libration scale).