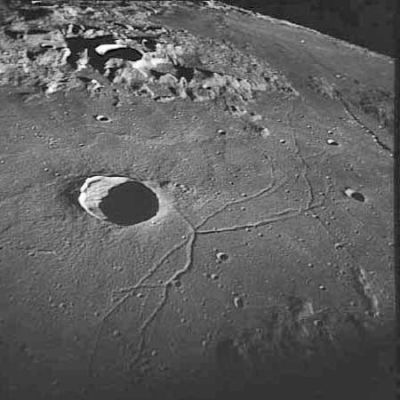 LPOD Photo Gallery Lunar Orbiter Images Apollo Images
- Apollo 10's photograph of Triesnecker (AS10-32-4819, see above) was also used by space artist Robert McCall to create one of his wonderful paintings of an expedition in orbit around the moon, see Page 1 of Fabio Femino's McCall pages (the third painting).
- Triesnecker was also captured on several oblique north looking Fairchild camera frames made during the mission of Apollo 16. One of them, frame AS16-M-0840, shows Triesnecker near the central part of the curved horizon.
Research Danny Caes

(IAU Directions) TRIESNECKER.--Apart from being the centre of one of the most remarkable rill-systems on the moon, this ring-plain, though only about 14 miles in diameter, is an object especially worthy of examination under every phase. At sunrise, and for some time afterwards, owing to the superior altitude of the N.E. section of the wall, a considerable portion of the border on the N. and N.W. is masked by its shadow, which thus appears to destroy its continuity. On more than one occasion, friends, to whom I have shown this object under these conditions, have likened it to a breached volcanic cone, a comparison which at a later stage is seen to be very inappropriate. The rampart is terraced within, and exhibits many spurs and buttresses without, especially on the N.E. The central mountain is small and not conspicuous. The rill-system is far too complicated to be intelligibly described in words. It lies on the E. side of the meridian passing through the formation, and extends from the N. side of Rhaeticus to the mountain-land lying between Ukert and Hyginus on the N. Birt likened these rills to "an inverted river system," a comparison which will commend itself to most observers who have seen them on a good night, for in many instances they appear to become wider and deeper as they approach higher ground. Published maps are all more or less defective in their representations of them, especially as regards that portion of the system lying N. of Triesnecker.