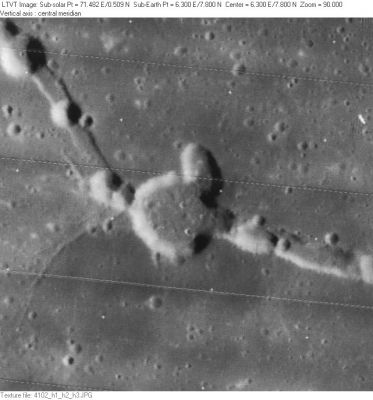 LO-IV-102H The crater Hyginus is like an elbow in the otherwise mostly straight Rima Hyginus. None of the smaller craters along the length of the rille have official names.

(IAU Directions) HYGINUS.--A deep depression, rather less than 4 miles across, with a low rim of varying altitude, having a crater on its N. edge. This formation is remarkable for the great cleft which traverses it, discovered by Schroter in 1788. The coarser parts of this object are easily visible in small telescopes, and may be glimpsed under suitable conditions with a 2 inch achromatic. Commencing a little E. of a small crater N. of Agrippa, it crosses, as a very delicate object, a plain abounding in low ridges and shallow valleys, and runs nearly parallel to the western extension of the Ariadaeus rill. As it approaches Hyginus it becomes gradually coarser, and exhibits many expansions and contractions, the former in many cases evidently representing craters. When the phase is favourable, it can be followed across the floor of Hyginus, and I have frequently seen the banks with which it appears to be bounded (at any rate within the formation), standing out as fine bright parallel lines amid the shadow. On reaching the W. wall, it turns somewhat more to the N., becomes still coarser and more irregular in breadth, and ultimately expands into a wide valley on the N.W. It is connected with the Ariadaeus cleft by a branch which leaves the latter at an acute angle on the plain W. of Silberschlag, and joins it about midway between its origin N. of Agrippa and Hyginus. It is also probably joined to the Triesnecker system by one or more branches W. of Hyginus.

Numbering the Marvels
Colorful Interpretation
Another Ina? (shows one of the LRO's exquisite close-up photographs of the eastern part of Hyginus's floor).