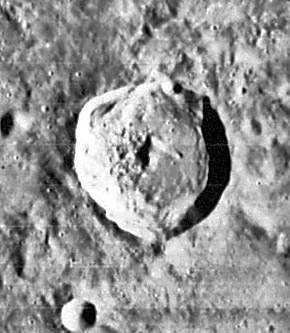 (IAU Directions) AGRIPPA.--A ring-plain 28 miles in diameter on the N. of Godin, with a terraced border rising to a height of between 7,000 and 8,000 feet above the floor, which contains a large bright central mountain and two craters on the S. The shape of this formation deviates very considerably from circularity, the N. wall, on which stands a small crater, being almost lineal. On the E., at a distance of a few miles, runs the prominent mountain range, extending northwards nearly up to the W. flank of Julius Caesar, which bounds the W. side of the great Ariadaeus plain. Between this rocky barrier and Agrippa is a very noteworthy enclosure containing much minute detail and a long straight ridge resembling a cleft. A few miles N. of Agrippa stands a small crater; at a point E. of which the Hyginus cleft originates.