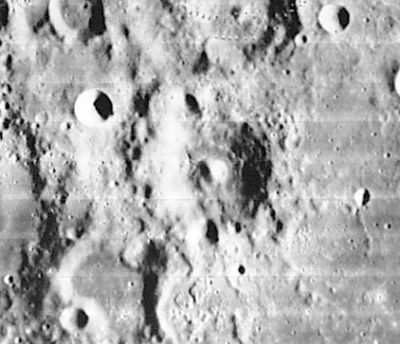 LOIV 101 H2 Airy is the crater with the strong central peak in the middle of the photo. Argelander is directly above it, truncated by the image margin.

(IAU Directions) AIRY.--About 22 miles in diameter, connected with Argelander by a depression bounded by linear walls. Its border, double on the S.W., is broken on the S. by a prominent crater, with a smaller companion on the E. of it; and again on the N.W. by another not so conspicuous. It has a central peak. The next link in the chain of ring-plains is Airy c, a very irregular object, somewhat larger, and with, for the most part, linear walls.