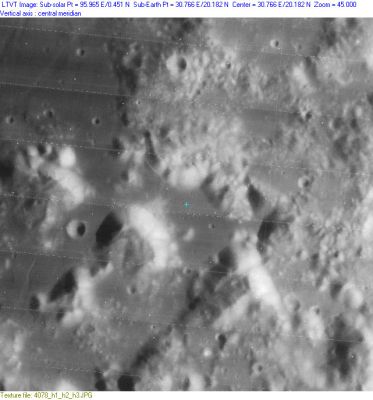 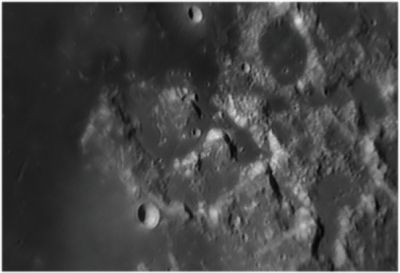 Left: LO-IV-078H, The exact landing site is indicated by the small blue "+" in the center of the frame.
Right: Mick Hyde

A curiosity:
The very last Hasselblad photograph which was made on the lunar surface (AS17-143-21941, Hi-Res) shows Jack Schmitt (the Lunar Module Pilot of Apollo 17) a few seconds after he threw his geology hammer away. Careful examination of this photograph reveals Schmitt's face which is visible behind his visor! Note one of his eyes which is looking toward the lens of Gene Cernan's camera.
Research: Danny Caes

The Third Man factor
This is some sort of unseen companion, described by many explorers in rough terrestrial terrain. This psychological phenomenon could also have created a "third entity" among both CDR Gene Cernan and LMP Jack Schmitt at the Taurus Littrow Valley. On the other hand... both astronauts (and every other couple of astronauts from the preceding Apollo landings) had satisfying company from their radio-communications with Houston and with the orbiting Command Module Pilot (CMP).
In other words: Earth and mankind were always nearby. But... what if these astronauts had no radio-communication with Houston, nor with the orbiting CMP...
See: Third Man factor (was this psychological phenomenon also known by NASA's medical staff?).

The riddle of the curious yellow "thing"