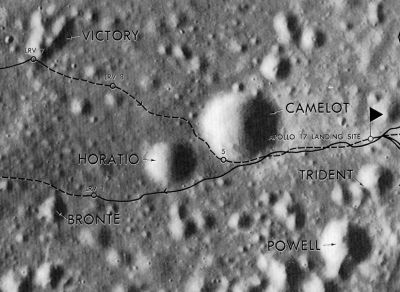 Victory (crater) - "Specifically honoring Winston Churchill, a political giant in the continuing struggle to preserve the spark of individual freedom resting within the 'English-speaking peoples'." ALSJ contributor Brian Lawrence notes that Churchill's famous 'Victory' speech was made in the House of Commons on 13 May 1940, in the very early days of World War II. Churchill said, in part, "What is our aim? ... Victory, victory at all costs, victory in spite of all terror; victory, however long and hard the road may be; for without victory, there is no survival."
Source: APOLLO LUNAR SURFACE JOURNAL, Eric M. Jones (APOLLO 17 - The Valley of Taurus-Littrow).