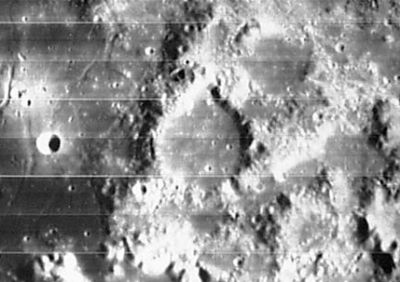 LOIV 078 H3 Littrow is the crater in the center. The 6-km circular crater on the far left is Clerke. To its upper left is the set of small craters known as Catena Littrow, and near both, the system of rilles known as Rimae Littrow. The 23-km depression to the upper right of Littrow is Littrow A.

(IAU Directions) LITTROW.--A peculiar ring-plain, rather smaller than Maraldi, some distance N. of Vitruvius, on the rocky E. border of the Mare Serenitatis. It is shaped like the letter D, the straight side facing the E. There is a distinct crater on the N. wall. On the N.E. it is flanked by three irregular ring-plains, and on the S.W. by a fourth. Neison shows two small mountains on the floor, but Schmidt, whose drawing is very true to nature, has no detail whatever. A fine cleft may be traced from near the foot of the W. wall to Mount Argaeus, passing S. of a bright crater on the Mare W. of Littrow. It extends towards the Plinius system, and is probably connected with it.

Apollo 14 and the low-albedo region west of Littrow

Littrow is (or was?) number one in the list of 12 localities in the Lunar Ellipse of Fire (see article from Farouk El-Baz in Sky and Telescope - June 1973).