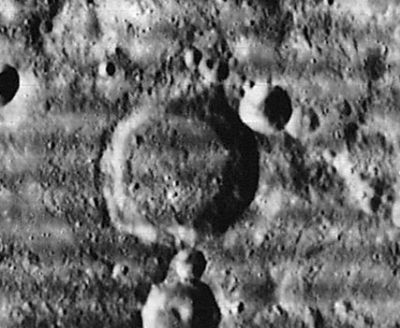 (IAU Directions) ALMANON.--This ring-plain, with its companion Abulfeda on the N.W., is a very interesting telescopic object. It is about 36 miles in diameter, and is surrounded by an irregular border of polygonal shape, the greatest altitude of which is about 6,000 feet above the floor on the E. It is slightly terraced, and is broken on the S. by a deep crater pertaining to the bright and large formation Tacitus b, the W. border of which casts a fine double-peaked shadow at sunrise. On the N.E. there is another bright crater, the largest of the row, running in a E.S.E. direction, and forming a E. extension of the remarkable crater-chain tangential to the borders of Almanon and Abulfeda. The only objects on the floor are three little hills, in a line, near the centre, a winding ridge on the E. side of it, and two or three other low elevations.