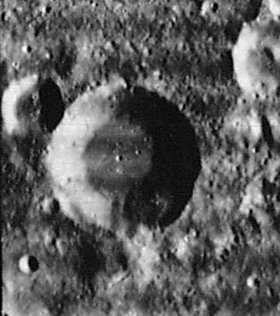 (IAU Directions) GEBER.--A bright ring-plain, 25 miles in diameter, S. of Almanon, with a regular border, rising to a height on the E. of nearly 9,000 feet above the floor. There is a small crater on the crest of the S. wall, and another on the N. A ring-plain about 8 miles in diameter adjoins the formation on the N.W. According to Neison, there is a feeble central hill, which, however, is not shown by Schmidt.

Jabir ibn Aflah (Geber) (unknown-circa 1145) was a Spanish-Arab astronomer.
Note:
Not to be confused with Jabir ibn Hayyan (also known as Geber). ibn Hayyan was the LTO-name for Zwicky N on the moon's farside.
See also the Pseudo-Geber problem.