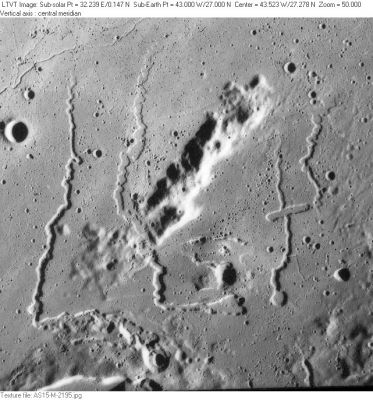 Apollo 15 image AS15-M-2195 The north rim of 46-km Prinz is in the lower left with 4-km Krieger C along the margin at left center. The small, possibly volcanic, craters Vera and Ivan are also visible. The elongated peak in the center was apparently once regarded as part of Montes Harbinger, with the northern part being named Harbinger Mu. The IAU’s Rimae Prinz includes the four large rilles around this peak, and probably the one starting in the lower right. The thinner rille in the extreme upper left is an extension of the the neighboring Rimae Aristarchus.