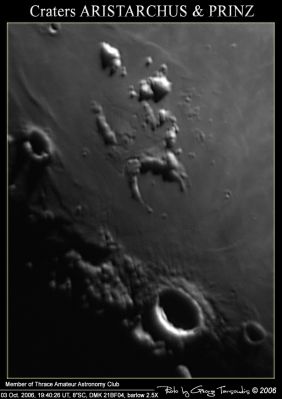 George Tarsoudis, Montes Harbinger consists of the brightly lit peaks near the top of this frame. At their southern end they touch the crescent ring of Prinz. The deeply shadowed crater near the left margin is Krieger, with Van Biesbroeck pitting its southern rim.
The large crater with the brightly-lit rim near the bottom is Aristarchus.

(IAU Directions) THE HARBINGER MOUNTAINS.--A remarkable group of moderate height, mostly extending from the N.E. of Herodotus towards Aristarchus. They include a large incomplete walled-plain about 30 miles in diameter, defined on the E. by a lofty border, forming part of a mountain chain, and open to the south. This curious formation has many depressions in connection with its N.E. edge. On the N. of it there is a crater-row and a very peculiar zig-zag cleft. The region should be observed when the W. longitude of the morning terminator is about 45 deg.

The remains of an unnamed crater in the cluster of the Harbinger mountains?

Montes Harbinger is a name from William Radcliff Birt.
These mountains are the harbingers of dawn on crater Aristarchus west of them (always during Waxing Gibbous Moon).