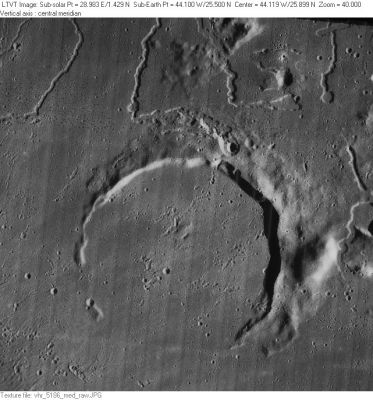 LO-V-186M Prinz is the large semi-circular crater in the center. On Prinz’s outer rim (at 1 o’clock) is the 2-km crater Vera (which seems to lie at the head of a rille); and, continuing on the same line, 4-km Ivan between two other rilles near the top. All the rilles in this view are probably regarded as part of the system known as Rimae Prinz, with the exception of the ones in the upper left corner -- they are part of the neighboring Rimae Aristarchus. Some of the hills on the right, and possibly the one directly north of Prinz are considered to be part of Montes Harbinger.

LPOD Photo Gallery Lunar Orbiter Images Apollo Images
AS15-88-12004 shows Prinz (right of centre) and Krieger (left). Note the reflection of the hand of the photographing astronaut! - DannyCaes Dec 14, 2007
AS15-93-12608, an orbital Hasselblad of Prinz and the rilles, was included on pages 258-259 of the splendid article TO THE MOUNTAINS OF THE MOON by Kenneth F. Weaver (NATIONAL GEOGRAPHIC, february 1972). - DannyCaes Dec 14, 2007

The environment around Prinz is described with special focus given to 3 small features in "Prinz and Nearby Features" by Raffaello Lena of the GLR group in the Winter 2008 issue of Selenology: Journal of the American Lunar Society.- fatastronomer