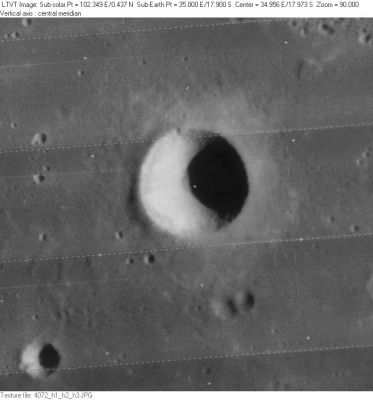 LO-IV-072H The "5-km" (current official IAU diameter) crater in the lower left is Rosse C.
Not seen in this photograph, just beyond the upper-right corner of the frame is the location of Rosse's Ghost''', which is an officially unnamed ghost-crater about the same size (diameter) of Rosse itself.

(IAU Directions) ROSSE.--A fine bright deep crater in the Mare Nectaris, N. of the pointed termination of the E. wall of Fracastorius, with which it is connected by a bold curved ridge, with a crater upon it. A ray from Tycho, striking along the W. wall of Fracastorius passes near this object. A rill from near Bohnenberger terminates at this crater.