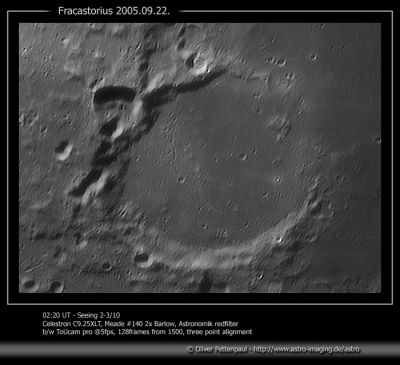 Oliver Pettenpaul
Bay-shaped crater Fracastorius at the southern part of Mare Nectaris. The more-or-less triangle shaped crater at the western part of the rim of Fracastorius was once called Romana (nowadays officially known as Fracastorius D). Romana was one of the discontinued names from H.P.Wilkins and P.Moore (see their book The Moon).
The recent versions of the Hallwag moonmap still show several examples of these discontinued names. Romana is one of them.

LPOD Photo Gallery Lunar Orbiter Images Apollo Images
Fracastorius was also captured on several oblique south-looking Fairchild camera photographs made during the mission of Apollo 16, such as frame AS16-M-0688, in which Fracastorius is noticeable near the central part of the curved horizon.
Research Danny Caes

(IAU Directions) FRACASTORIUS.--This great bay or inflexion at the extreme S. end of the Mare Nectaris, about 60 miles in diameter, is one of the largest and most suggestive examples of a partially destroyed formation to be found on the visible surface. The E. section of the rampart is practically complete and unbroken, rising at one peak to a height of 6,000 feet above the interior. It is very broad at its S. end, and its inner slope descends with a gentle gradient to the floor. Towards the N., however, it rapidly decreases in width, but apparently not in altitude, till near its bright pointed N. extremity. Under a low sun, some long deformed crateriform depressions may be seen on the slope, and a bright little crater on the crest of the border near its N. end. The southern rampart is broken by three large craters, and a fine valley, running some distance in a S. direction, which diminishes gradually in width till it ultimately resembles a cleft, and terminates at a small crater. The W. border is very lofty and irregular, rising at the N. corner of the large triangular formation, which is such a prominent feature upon it, to a height of 7,000 feet, and at a point on the S.W. to considerably more than 8,000 feet above the floor. N. of the former peak it becomes much lower and narrower, and is finally only represented by a very attenuated strip of wall, hardly more prominent than the brighter portions of the border of Stadius at sunrise, terminating at an obscure semi-ring-plain. Between this and the pointed N. termination of the E. border there is a wide gap, open to the north for a space of about 30 miles, appearing, except under very oblique illumination, as smooth and as devoid of detail as the grey surface of the Mare Nectaris itself. If, however, this interval is observed at sunrise or sunset, it is seen to be not quite so structureless as it appears under different conditions, for a number of mounds and large humpy swellings, with low hills and craterlets, extend across it, and occupy a position which we are justified in regarding as the site of a section of the rampart, which, from some cause or other, has been completely destroyed and overlaid with the material, whatever this may be, of the Mare Nectaris. The floor of Fracastorius is, as regards the light streaks and other features upon it, only second in interest to those of Plato and Archimedes, and will repay systematic observation. Between thirty and forty light spots and craters have been recorded on its surface, most of them, as in these formations, being situated either on or at the edges of the light streaks. On the higher portion of the interior (near the centre) is a curious object consisting apparently of four light spots, arranged in a square, with a craterlet in the middle, all of which undergo (as I have pointed out elsewhere) notable changes of aspect under different phases. There are at least two distinct clefts on the floor, one running from the E. wall towards the centre, and another on the S.W. side of the interior. The last throws out two branches towards the S.E.

Back to a Fractured Floor Fractured, Tilted, and Flooded