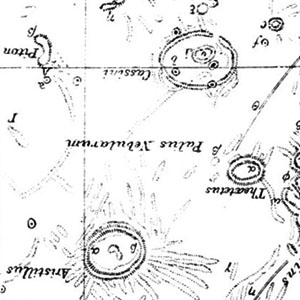 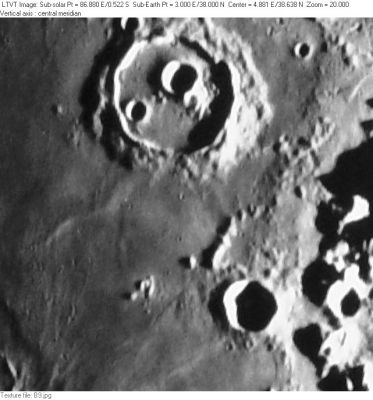 Left: extract from Neison’s Map 3 (rotated to north up); Right: Consolidated Lunar Atlas Plate B9 The multi-part crater at the top of the frame is Cassini. The smaller deeply shadowed one near the bottom is Theaetetus. The name "Palus Nebularum" apparently referred to the long, pointed section of mare between them; just south of Cassini; but to some it may have extended farther because Elger refers to Theaetetus as lying within it. Possibly it refers to the entire ring of mare around Cassini.

Neison, 1876 (p. 182) describes Palus Nebularum as “a level plain without any natural boundary on the south and east.” In place of a natural boundary, he suggests it should be regarded as extending to an imaginary line drawn from Theaetetus to Aristillus and from there to Mons Piton and then to Cassini Eta, a peak to the NW of Cassini (at the top of the extract from his map). Presumably Neison regarded it as including all the mare area to the north and east of Cassini, but he is not clear about that.